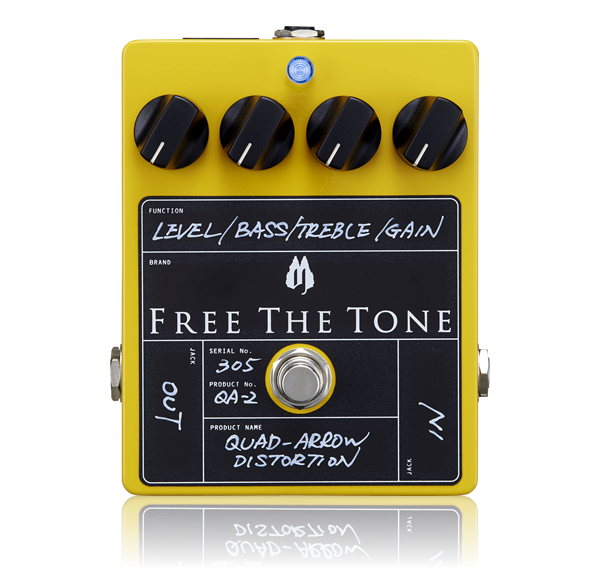 The QUAD-ARROW DISTORTION has a new power circuit that was developed for the FREE THE TONE Custom SOV-2 Overdrive.

The sound has been refined to produce a powerful distortion pedal. The voltage is boosted internally to ±15Vdc.

This distortion pedal features wild power made possible by this voltage. The effect follows the guitar’s output in a natural way, going from distortion to crunchy or clean as the guitar’s volume is turned down. It responds to picking nuances in the same way.

The TREBLE and BASS tone controls are provided to allow a wide range of tonal adjustment. Also, you will find that the signal-to-noise level is excellent for a high-gain distortion.

While working in the lab and listening to a Van Halen album I was impressed by the way Eddie could create a variety of sounds by adjusting the volume control on his guitar. The more I listened the more impressed I became, and I decided that I wanted to create a distortion effect that would get crunchy or clean when the guitar’s volume is turned down, and deliver full distortion when the volume is turned up. At the same time the distortion would have to be bright without being too heavy, and it would have to deliver the required performance with any amplifier – even a small practice amp! In short, I had decided to make an effect pedal that would deliver tube amp sound.

It wasn’t easy. Achieving tube amp type distortion that responds naturally to guitar volume in an effect pedal is something many pursue but few achieve, and development was dragging on. Then one day I realized that the 9-volt power supply was the root of my problems, causing too much compression and robbing the sound of it’s edge. At that point the design approach shifted from “effect pedal” to “preamplifier,” so a ±15V power supply of the type used to achieve maximum dynamic range was incorporated, and after adding a bit more “special” technology, the sound I had envisioned finally became a reality. It took a very long time to create the QUAD-ARROW DISTORTION, but we believe you’ll appreciate the difference.