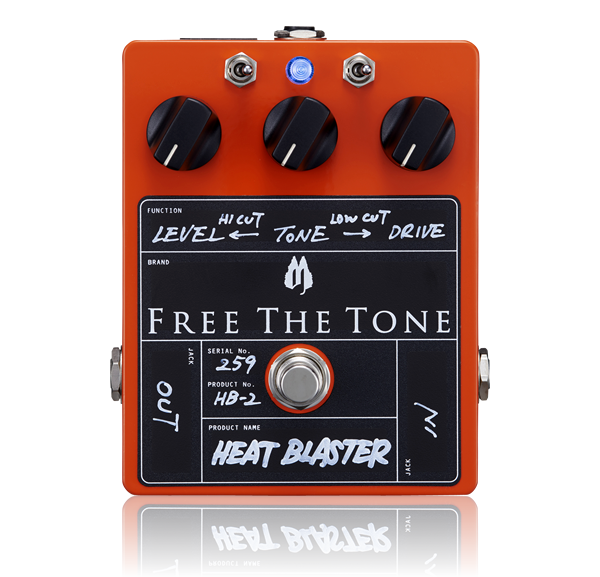 The FREE THE TONE HB-2 HEAT BLASTER features a modern distortion sound. With the HI CUT and LOW CUT switches, you can create variations in sound.

The LOW CUT switch cuts low frequencies. A combination of the bass and drums in the low frequency range is important for a band sound. The LOW CUT switch allows you to trim the low end that cannot be adjusted by an amplifier’s tone circuit. Effect on/off switching uses a special true-bypass method in which the signal goes through only one line in the switch in Bypass mode.

One morning I awoke with a great distortion sound in my mind. The sound was surprisingly distinct and clear, and similar to that of a modern high-gain tube amp. The HEAT BLASTER was born from the sonic image I awoke with that morning. But I had to get to work immediately in order to turn the mental image into actual sound before it changed or faded away. It was a race against time. I began mentally designing the circuitry on my way to the lab, and was ready to start building by the time I got there. All previous plans and appointments for that day were postponed while I set to work, and after about 6 hours of non-stop prototyping and testing I had a sample that delivered the required sound (definitely a speed record). The sound was almost exactly as I had imagined it. But that was all I could do in one day. I was exhausted. But I had my circuit, even though at that point it was nothing more than a bunch of parts directly soldered together… looking more like a jungle gym than a guitar effect. The following day the circuit was carefully installed in an enclosure so as not to alter the sound, and with a few more tweaks became the template for the HEAT BLASTER.

My imagined sound was sort of “orange,” so the HEAT BLASTER enclosure is orange as well.