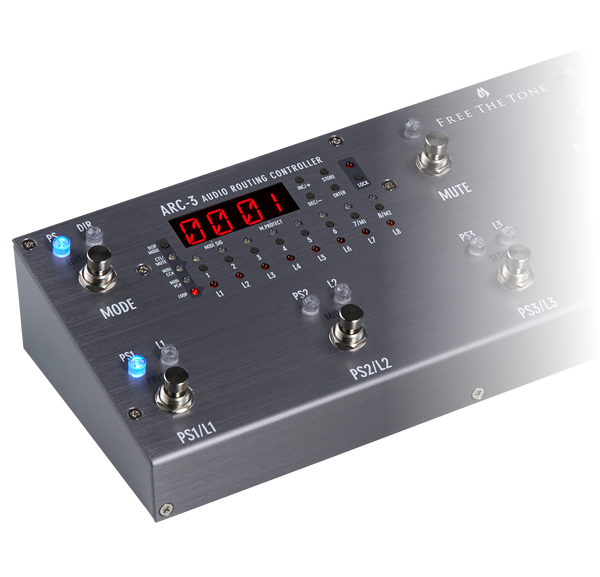 FOR GREATER FREEDOM AND EXPRESSIVENESS

The ARC-3 is the FREE THE TONE’s flagship model completed after improvements in operability and reliability based on practical tests at live venues, rehearsal studios, etc.

The ARC-3 has a built-in HTS (Holistic Tonal Solution) Circuit that operates at an internal voltage of ±15 Vdc to preserve the original characteristics of a bass, guitar, effects and amp. It manages everything at the input and output, including the send and return for effects, and the signal line.

The ARC-3 provides the sound quality FREE THE TONE has created for professional musicians on request.

HThe effected sound and bypassed sound managed by the HTS Circuit will always have the same sound quality, which solves a problem that has plagued players for years.

How many MIDI ready effects units can the ARC-3 control?
The ARC series can send multiple MIDI signals simultaneously. The ARC-3 can independently control up to eight units.

I want to use my ARC-3 to control multiple effects units individually via MIDI. But I can’t. Why?
By default the ARC-3 is shipped with its MIDI Tx Global function turned on and MIDI use is limited to one channel. You can send up to eight channels of MIDI signals by turning off this function by following the steps described below.

Is it possible to control a MIDI ready effects unit not included in the ARC-3’s loops?
Yes. You can individually control up to eight units by connecting them with MIDI cables.

I am planning to implement spatial or modulation effects in my system by using my amplifier’s send/return loop. In this case, is it possible to connect the amplifier’s send to the IN-B jack and connect spatial compact effects to Loops 5, 6, and 7?

Can I use my ARC-3 linked with an ARC-53M?
Yes. Although the ARC-53M does not have a link terminal, it supports MIDI. So you can use these two units at the same time by connecting them via MIDI.
Ex) From ARC-3 MIDI OUT to ARC-53M MIDI IN

Is it possible to remote control a BOGNER effects unit’s boost and bypass from an ARC unit?
Yes, although the BOGNER products’ control signal type is different from what is commonly used.
The ARC series provides a setting called “Momentary 2”. It is a mode to support BOGNER products. Connect to the C1/C2 jack with a stereo cable and you can control both Boost (C1) and Bypass (C2). By connecting to the C3 jack with a monaural cable, you can control Boost only.
NOTE: For control type setting procedures, please refer to the ARC-3 manual page 11, item (3).

What is your recommended expression pedal for use with the ARC-3?
We recommend the following volume pedals with 10k–25kΩ resistance:
BOSS FV-500L、EV-5
ERNIEBALL VP JUNIOR 25K
ERNIEBALL 6167
NOTE: A FV-500L can be connected with a stereo cable. Use a stereo Y cable for the two models from ERNIEBALL.

When I connect my ARC-3 to a device via MIDI, noise appears but disconnecting MIDI stops it. Why?
In rare cases noise can be heard when connecting some effects units or amplifiers to an ARC series unit (or switcher in general) via MIDI. This occurs because the MIDI signal circuit in your effects unit (or amplifier) is connected to the signal ground, making a ground loop and therefore noise results.
In this case, the cause is in the circuit design of the effects unit (or amplifier) and it is impossible to solve it on the ARC series unit (or switcher in general) side. You may need to make a special MIDI cable with a lifted ground.

Must I update the firmware in the order of release to step up the versions?
No. We create the latest firmware based on its previous version and therefore it contains corrections done in all of the preceding versions. So simply install the latest version.