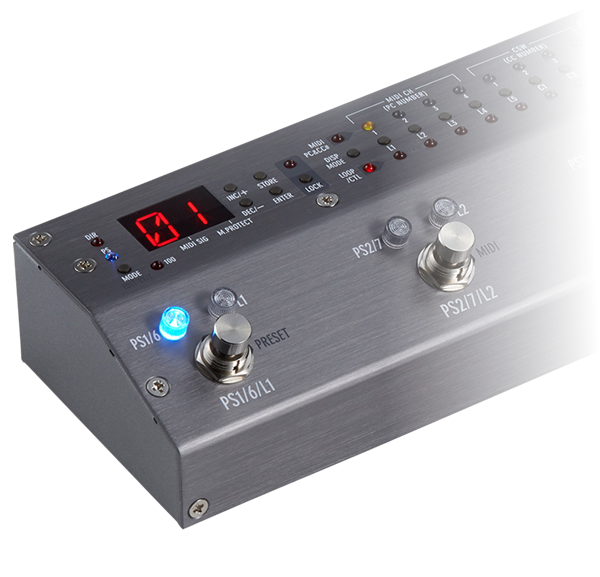 FOR GREATER FREEDOM AND EXPRESSIVENESS

The effected sound and bypassed sound managed by the HTS Circuit will always have the same sound quality, which solves a problem that has plagued players for years.

Can I use my ARC-3 linked with an ARC-53M?
Yes. Although the ARC-53M does not have a link terminal, it supports MIDI. So you can use these two units at the same time by connecting them via MIDI.
Ex) From ARC-3 MIDI OUT to ARC-53M MIDI IN

When connected as above, the ARC-53M can receive a MIDI program change number programmed on the ARC-3 and then recall the specified program on the ARC-53M. So you are controlling the ARC-53M from your ARC-3.

How can I turn on/off the FT-1Y from the ARC-53M via MIDI?
A：Setup the ARC-53M by following the steps described below.
1) FT-1Y Setup: Set the MIDI channel to CH1 or AL (Omni mode).
2) MIDI CC Number Setup: Put the ARC-53M in Edit mode and set “CC number 61” referring to the ARC-53M manual, page 11, “CSW CC#” procedures.
Enter as follows:
Parameter 1：CSW1
Parameter 2：61(MIDI CC#)
Parameter 3：CH1(MIDI channel)
3)Programming: Switch from Edit mode to PS mode. Then set the multi-status LED on the ARC-53M front panel to show “MIDI CC#”. Turning on/off the CSW1 switch now toggles the FT-1Y’s effect on and off.

When I connect my ARC-53M to a device via MIDI, noise appears but disconnecting MIDI stops it. Why?
In rare cases noise can be heard when connecting some effects units or amplifiers to an ARC series unit (or switcher in general) via MIDI. This occurs because the MIDI signal circuit in your effects unit (or amplifier) is connected to the signal ground, making a ground loop and therefore noise.
In this case, the cause is in the circuit design of the effects unit (or amplifier) and it is impossible to solve it on the ARC series unit (or switcher in general) side. You may need to make a special MIDI cable with a lifted ground.

Is it OK to secure the ARC-53M to my pedalboard with screws?
No. The ARC-53M has not been designed to be secured to a board with screws. Do not use screws to fix the ARC-53M to your board. A screw could possibly make contact with the PCB board inside the unit and damage it, resulting in a failure. Drilling holes in the product for securing screws will void the warranty.