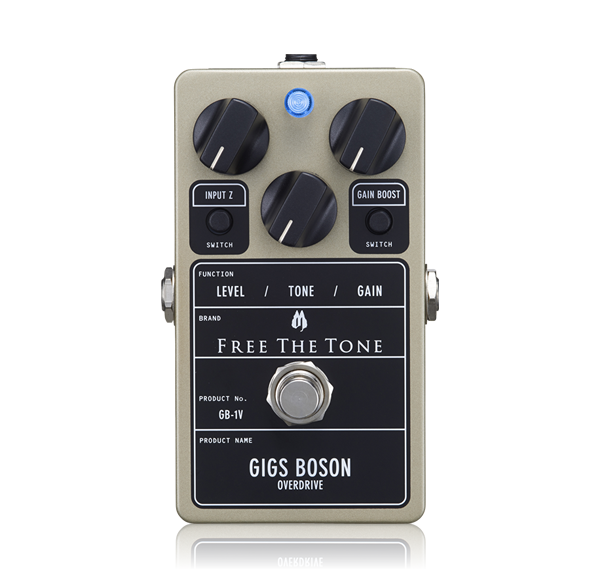 This is the result of guitarists’ quest for higher expression power not obtainable just from clean tone. The FREE THE TONE GB-1V “GIGS BOSON” has overwhelming expression power that can reproduce the pick angle when the string is plucked and sound changes produced by the touch of the left hand. All of these things are necessary to transform the overtones produced by the strings into sounds and music. The “GIGS BOSON” will provide guitarists with a higher expression ability and new stimuli.
On July 4, 2012, a new particle was discovered. It was the “God particle”, an important part of the Big Bang or the creation of the universe, and the factor that gave mass to subatomic particles that were without mass at the creation of the universe. It was named the Higgs Boson after Peter Ware Higgs who advocated its existence. This discovery has completed all of the hypothetical particles and is estimated to be the first step toward the investigation into Dark Matter. Hoping that the encounter with this effects unit will become a new step toward the evolution of the GIG (performance) world, we named our new overdrive pedal the “GIGS BOSON”.

As many of you have probably realized, the name “GIGS BOSON” was derived from the Higgs Boson particle, which was predicted in 1964 by Prof. Peter Higgs, a British theoretical physicist and emeritus professor at the University of Edinburgh. The Higgs boson is often called “the God particle” because it’s said to be what caused the “Big Bang” that created our universe billions of years ago. The Higgs boson is believed to be what gives mass to matter. Evidence of the existence of the Higgs Boson was announced in the summer of 2012 and the news of this discovery was transmitted all over the world.

At the time, Free The Tone was developing a new effect which became the first effect pedal produced under the Free The Tone brand after we became independent and we wanted to make it our flagship product and set out to achieve an overdrive pedal that would become a reference for great tone. Yuki Hayashi, the owner and development engineer of Free The Tone, was very successful in designing this pedal, and we wanted to find a good name for the new pedal to give an image of the universe, nature, sky, forest, etc. At that time, the news of the Higgs Boson was very big in Japan, and it was from the Higgs Boson that the name “GIGS BOSON” was born. When we named the pedal “GIGS BOSON” we hoped, in the same way that the discovery of the Higgs Boson is a first step in elucidating the structure of the Universe, that the GIGS BOSON overdrive pedal would become musicians’ first step into discovering a world of new tones.

In February 2013, we received a message from a British guitarist Jonny Higgs. He said…

"I have just received a link to your website detailing the Gigs Boson Pedal. At times it seems somewhat bizarre to me that the influence of my father-Peter Higgs has been quite so far reaching. As well as predicting the existence of an elementary sub-atomic particle,apparently there also exists Skateboard wheels, Beer from Barcelona and now of course -boutique effects pedals. As a guitarist myself I have high expectations and look forward to trying one of your pedals out!”

We were very surprised and pleased to receive this message from Jonny Higgs, the son of Prof. Peter Higgs. We never imagined that word of our product the GIGS BOSON, would reach Prof. Peter Higgs himself. We take great pride and pleasure in introducing here Prof. Peter Higgs, who would more suitably be on the cover of a science magazine, and his son, Mr. Jonny Higgs.

After Jonny tried the Gigs Boson, he sent us the following comment on the pedal.
"I have been really enjoying using the Gigs Boson pedal!
I have found that when using the Gigs Boson,it manages to retain the dynamic response and sensitivity to my playing throughout the wide range of gain it has on offer. Unlike many of the other overdrive pedals on the market which often sound mid-heavy and compressed,the tone remains balanced and true to the original signal.This is a great sounding pedal and will be the primary source of overdrive within my setup!
Cool name too! “

We are very honored to have been able to make the acquaintance of both Prof. Peter Higgs and Mr. Jonny Higgs. We sincerely hope that the GIGS BOSON will be the pedal that many musicians have been seeking, just as many scientist has been searching for the Higgs Boson for a long time.

HThe effected sound and bypassed sound managed by the HTS Circuit will always have the same sound quality, which solves a problem that has plagued players for years.