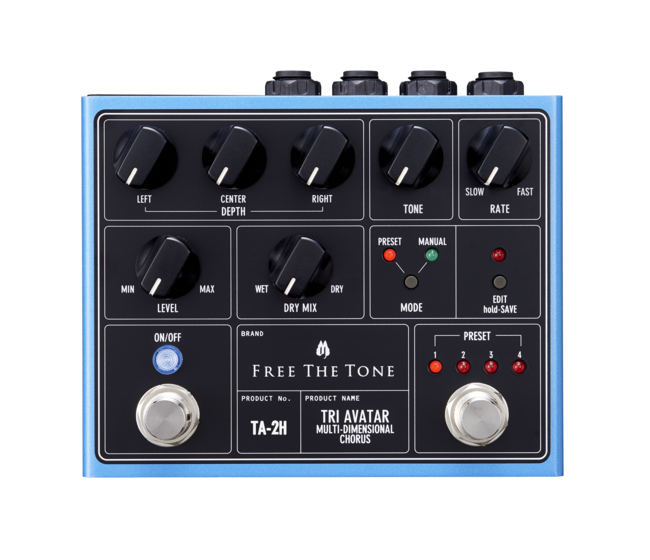 The 3-phase chorus TRI AVATAR is back with additional features!
Available on July 21, 2021

The Free The Tone "TRI AVATAR" is a next generation chorus pedal with four signal paths for three chorus sounds (three phases) and one dry signal. In stereo operation the first phase of chorus sound is assigned to the L side, the second phase to the L+R sides, and the third phase to the R side. In monaural operation all of the three phases are mixed together. By mixing three independent chorus sounds the TRI AVATAR adds more width and depth to its output and the result exceeds that which can be achieved by conventional stereo chorus pedals. Problems with usual chorus units such as unintentional pitch changes, sound images with blurred lower end, and noises relating to sweep timing have been solved by combining Free The Tone's analog and digital technologies and with its unique know-how. The result is our completely new chorus pedal that will amaze its users with the various incredible sounds that can be created by a single chorus pedal.
The conventional TA-1H has only four presets that can be saved settings, but the new TA-2H has significantly increased the number of presets to 128.
In addition, the new TA-2H employs the same AD/DA converter used in the FLIGHT TIME (digital delay), allowing you to enjoy a warmer mid-low range sound. Please experience the potential of the TA-2H, which produces a variety of sounds beyond the conventional concept of chorus pedals.