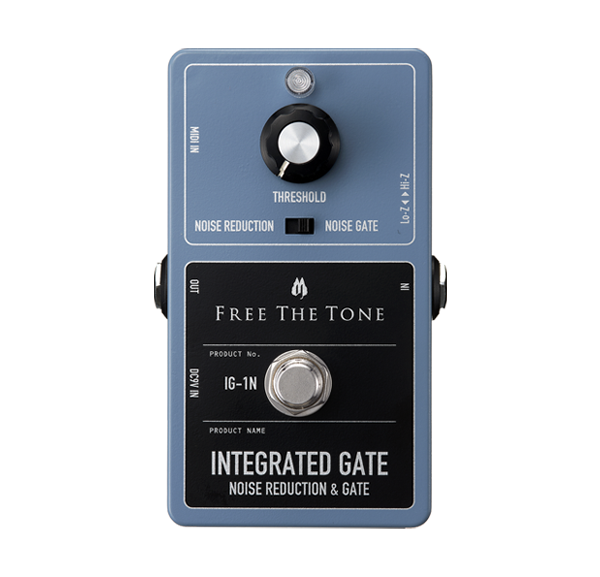 Noise picked up by guitar and bass pickups has long been a problem for musicians, recording/PA engineers, and electrical engineers. In recent years, it is said that the amount of noise picked up by pickups has increased due to the spread of personal computers, LED light bulbs, cellular phones, and wireless devices. The type of noise varies from a low booming buzz to a very high shrill noise, depending on the location. In a severe situation, it may interfere with your guitar or bass playing. To make the noise less noticeable, the volume can be turned down quickly or muted with a volume pedal or switching system, but a limit is soon reached with such methods because there are often many different phrases and tunes to be played making it difficult to also deal with noise problems. We have received many inquiries about how to reduce noise, especially that picked up by pickups on stage and how to create an environment in which the player can concentrate on the performance.

There are several ways to reduce the noise picked up by pickups, such as employing noise-canceling pickups or improving the shielding effect of the guitar or bass itself, but all of them change the sound quality of the output from the instrument. In addition, the amount and bandwidth of the required noise reduction can vary, and its effect is often limited. Alternatively, a high-cut filter can be used to make the noise less noticeable, but that will change the important sound quality. We have considered various solutions to reduce noise, and have found that automatically reducing the level of the signal output from the instrument is the best way to preserve both the sound quality and the naturalness of the decay of the instrument’s sound. Turning down the volume with the volume knob on the guitar or a volume pedal – an operation that used to be done manually to make the noise less noticeable, is now performed electronically, automatically, and at high speed.

Fusion of Digital and Analog

In developing the “INTEGRATED GATE”, we adopted an approach in which the audio signal line is left in the analog domain without being digitized from the viewpoint of emphasis on sound quality, and the output level is controlled at high speed and accurately by a digital circuit. We have adopted a digitally controlled analog circuit system which is one of our strengths. This technology is also used in our PA-1Q series (Programmable Analog 10-Band EQ) and TRI AVATAR (TA-2H).

The noise picked up by a pickup becomes more noticeable as the string vibration decays and the volume decreases. The attenuation of the string vibration is not linear, and there are also swells in the vibration, and in reality, while it is gradually attenuating, it is also repeatedly increasing and decreasing in volume. This can cause an unnatural sound at the end of a note when using conventional noise gates. To solve this problem, we have newly developed a signal monitoring function that constantly monitors the input signal by use of a CPU. By constantly monitoring and analyzing the input waveforms, and by performing high-speed control to achieve an optimum output level based on the waveforms, we have succeeded in obtaining natural attenuation.

The “INTEGRATED GATE” has both Noise Reduction and Noise Gate modes.

• Noise Gate Mode
In this mode, the sound is muted immediately when the volume drops below the set volume (THRESHOLD value). This is useful when you want to stop the sound immediately while playing. It can be used as a crisp gate effect.

The most difficult issue was how to minimize the sound quality change caused by passing through the “INTEGRATED GATE.” Ideally, there should be no change in sound quality when the “INTEGRATED GATE” is connected. In order to convey the true sound of guitars and basses to the equipment connected after this unit, the circuit through which the audio signal passes is a completely analog circuit, and we spent a great deal of time examining and perfecting the sound quality. You will notice that its sound quality is fundamentally different from that of conventional noise reduction devices or noise gates.

In addition, this unit is equipped with a MIDI IN terminal, which allows you to control the effect on/off via MIDI signals. This is a very convenient feature when using this unit in conjunction with an audio routing controller such as our ARC-4 or ARC-53M, etc. Since there is no need to connect it to an effect loop, it can be integrated into your pedalboard without major wiring changes.